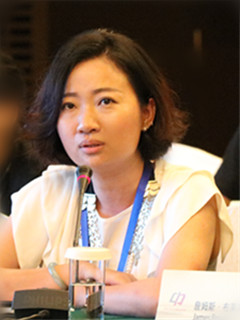 Yu acts as the editor-in-chief and general translation director of New Knowledge of South America magazine and news net. She is also the Spanish secretary and head of literature and art at the Venezuela Overseas Chinese Literary Association. Born in Foshan of Guangdong Province in 1979. Yu Xin immigrated to Venezuela with her parents in 1990. Since 2000, she has begun acting as the bilingual (Chinese and Spanish) master of ceremonies for major events held by the overseas Chinese groups as well as the translator for speeches by key overseas Chinese officials. Yu partook in the planning, training and directing of the first overseas Chinese beauty pageant contest at the National Theatre of Venezuela in Caracas in 2005. She has also attended many local beauty pageant events as the guest judge. She founded the bilingual (Chinese and Spanish) full-colour monthly magazine New Knowledge of South America in 2007, and launched New Knowledge of South America news net in 2011.